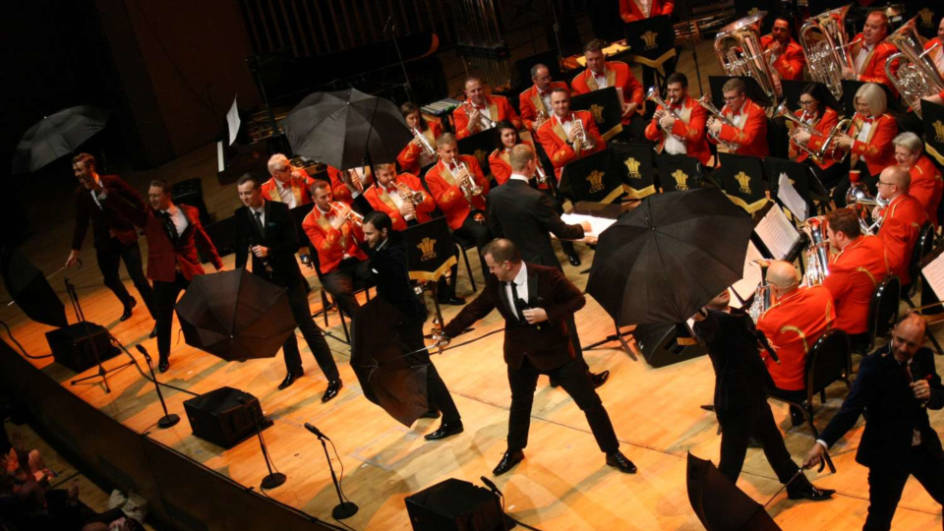 On Sunday 26th May Brass Pass TV had the pleasure of live streaming from Birmingham Town Hall as The Cory Band were on their third and final 2019 UK performance collaboration with the Male vocal group Sensation Only Men Aloud. Both Welsh based icons had previously performed together at the Sage, Gateshead in 2017 which had been a roaring success and so it made perfect sense to see the combination of brass and voice take to the stage again.

This particular performance began at 2:30pm and the programme this year was a show stopping cinematic inspired medley of pieces entitled ‘Brass & Voice at the Movies’. The programme ranged from songs from Mama Mia to Star Wars and Putin on the Ritz to The Lion King! Props were included!!

The concert had something for everyone and a particular favourite of Brass Pass TV’s was Harper’s own arrangement of the Pixar classic film The Incredibles – A piece that the band performed without the choir, however its fast and furious nature really caught our attention.

The beauty of this particular concert was that you got to hear the best band in the world performing well known movie classics at the highest level. The standard of the current Brass In Concert reigning champions performances at entertainment level is so high that they turn pieces such as Indiana Jones, that I am sure we have all either performed or listened to in our own local bands, into mouth dropping WOW moments! Paired with the wonderful Only Men Aloud who first came to fame when they won the BBC Television programme Last Choir Standing in 2008, have recorded 5 CD’s in the past 10 years as well as performing at mass events such as the 2012 Olympic Games – this was a concert not to have been missed.

The concert took the format of an individual piece followed by a collaborated piece before coming to a close with the final joint rendition of Disney’s classic ‘Let it Go’ from the film Frozen. It was a fantastic way to end a truly enjoyable concert – we hope to see some more dates soon in the 2020 diary!

Subscribe to BRASS PASS TV now to watch back this special event!

Leave your thoughts Click here to cancel the reply

BrassPass is an international platform linking brass bands and enthusiasts across the world.

Send to a friend